Exactly 3 weeks ago today, I took great pride in taking part in the biggest march ever in the UK which was all about demanding a Peoples Vote on Brexit.  We came from all corners of the UK and from across elsewhere in the EU. I interrupted my own Cyprus sojourn to fly out to London to play my part in history.
Walking around London early on Saturday morning, we peeled our eyes for the tell-tale EU flags and t-shirts and  fretted a little about whether it would be a bigger march than the October remain march but of course at that time many of the coaches were still on the road.  I made a point of visiting my Final Say for All friends first who promptly thrust a plastic cup of delicious Pimms in our hands, it was a little early but, well, you must be polite about these things.
Then I went on to meet my Chester friends who had set off on coaches at 6.30am.  We met on Oxford Street at 11.30am and walked together down to Park Lane.  A conga line of banners and excited chatter, there were maybe 300 of us.
As we plunged into an ocean of faces, a vibrant mass of blue with yellow jewels twinkling, a plethora of banners and placards bearing messages from the hilarious to the incandescent (though being Remain, unfailingly polite rage), my earlier worries slipped easily away.  It was BIG.  We merged into the crowd and then we stopped  Here we stood for at least 2 hours.  Some of our group treated us to some singing and music.  We chatted together and made new friends with those around who stood with us.  From time to time we would move a little, but it was due to small groups slipping out of the crowd and crossing Hyde Park to try and get into the route further ahead.
The media helicopter flew over several times. You may well have seen the YouTube footage condensed down to 90seconds.  Our feet ached but still the smiles and laughter prevailed.  It felt good to be part of this movement.  For the last two years our Remain community has sometimes experienced some disagreements particularly the online campaigners, stemming mostly from the use of different tactics and varied priorities of all the different grass roots groups and the high-profile organisers.  But on that day these differences were trifles, forgotten, squabbles laid to one side.  We were focused on delivering, by our very massive presence the following messages to parliament, to the country and to the EU.
We want to remain EU citizens
We were all lied to by the Leave Campaigns
We stand by our EU27 families and friends and will stop them being treated as second class citizens
We demand an opportunity for all to compare the reality of leave against our EU citizenship and we must be allowed to vote on which we want.
We are all losers in Brexit, a game designed by billionaires and, ideologues and narcissists greedy for power and money at the expense of the ordinary citizens.
Eventually we were able to shuffle along.  As the marchers ebbed and flowed it was quite difficult to keep our banners together.  In a crowd that size it is difficult to keep more than half a dozen people together all the time and we were constantly speeding up and slowing down to reconvene by our banners as we lost and found each other.  Old friends emerged from the crowds to surprise us.  It seemed a minor miracle for me to bump into my friend from Elspeth in the massive crowd.  We made slow progress, unable to access social media we hoped our friends at home were keeping our march trending for us. 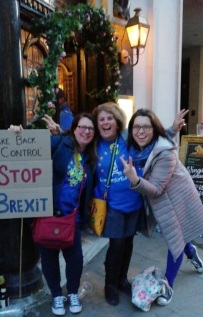 At 4.40pm we came within distant sight of the first big screen near the National Gallery.  We were on Pall Mall.  Our coach people had to leave as some tube stations were closed due to the crowds so they would have a longer journey back,  so we stepped out of the march at this point to send them in the right direction. We hadn’t seen a single speech, but we were elated to realise the scale of the event and the scale of our achievement.  We all did that together.  We stood and watched for a while.  A huge group of young people were playing music and dancing, looking as fresh and energetic as if they had only just started the party.
As we headed back the way we had come in search of seating, food and drink we came upon the end of the march, the police vans at the back just around the corner of St James Street on Pall Mall.  The time was 5.03pm.  We had indeed been marching for 5 hours.
SO, WHAT NEXT
Here we are, 3 weeks later, and we have celebrated not 1 but 2  no-Brexit days.  We hang on to our EU citizenship by the skin of our teeth, but it is still in grave danger.  The extension until the 31st October clearly means we will be taking part in the European Parliament Elections.
We did an extraordinary job on March 23rd2019, we got our people to London at relatively short notice, we booked coaches, we organised, we publicised, we stood on our stalls and passed on our passion.  MPs seemed to take notice, and they did for a while, but they are drifting back to type now, and we cannot stop.
Labour is still playing the “will they won’t they game”, Remain Tories are still in denial that they will suffer at the ballot box if they allow Brexit to continue and we now have a UKIP mark II to contend with, organised and ready to go which will terrify and tempt the big two into trying to grab on to their leave voters with extreme positions.
If we want all we have done for 2 years including the March march to count at all, we must continue,  Its down to us.  We mobilised marchers and got well over 1 million people on the streets, quite possibly 1.5 million, we spread the revoke article 50 petition to 6 million people still rising.  We need to apply that passion and imagination to the EU elections.
Looking at the polls today for the EP elections, our remain votes are split, and we may be in danger of not getting our favoured Remain MEPs in.  We cannot allow a result which our opponents can use to say there is a fresh Leave mandate.  We must focus our minds and our actions on how we are going to demonstrate our strength via the EU elections.  So, we must do  the following things.
1. Contact our local remain oriented parties and demand they have an alliance and  joint strategy to maximise the remain vote.  New parties sound great but for our strategic purposes they could be our downfall.  The voting system in these elections still favours big parties.
2. Labour members you must somehow get your manifesto to be transparently a remain platform.  If you do not do that, you leave labour voters vulnerable to being counted as supporting a Brexit supporting party.
3. We desperately need our best minds and EU experts to help us work out a strategic voting system to achieve our aims.   I have linked below to one I saw today but I suspect we will need several other well-informed voices so we can make our minds up which way to go.
4.  THE MOST IMPORTANT THING WE CAN DO.    We must get our remain vote out. Us, our friends, our families, our workmates, our young voters, our EU27 citizens who have a vote and a vested interest.  This must happen, no ifs, no buts and we must pour our campaigning energies into this aim.
We have come so far my friends, its good to stop for a moment and look at what we have achieved, but we still have a long way to go.  I won’t stop yet.  Will you?
@redalphababe
READ: TACTICAL VOTING FOR REMAINERS
WATCH- THE MARCH SPED UP INTO 90 SECONDS

2 thoughts on “The March in March and What’s Next.”

This site uses Akismet to reduce spam. Learn how your comment data is processed.