I thought it was time for a catch up.  We have been travelling for nearly 3 weeks now in Eric our lovely motorhome.  Eric has looked after us well though we got into a bit of a scrape in a Lidl when we caught the roof with the roof of a parking place.  No harm done just a little embarrassment.  We have travelled down through France into the North of Spain and then down through Portugal.

Having entered Spain from France with not much of a fanfare, we had set our route on non-toll roads and we had a couple of lovely days in San Sebastian also known as Donostia in Basque. We wild camped in Leon for a night and decided to press on to Santiago de Compostela which was an important stop in Galicia for me.  We had booked 3 days in a campsite in the city.

Santiago de Compostela is the city of my birth.  I have few memories of that place, given I was an infant when my family left, but I do have some pictures in my head from visits there and I cling to them.  Our memories are part of what makes us who we are.  They keep our feet on the ground and our memories of love comfort our hearts and give strength to us in times of our greatest need.

As we got closer to the city, we could see from the motorhome more and more pilgrims walking along El Camino, the walk of Saint James.  They strode along the paths mostly alone, easily recognisable in the big waterproof hooded capes over their bodies and rucksacks and carrying the sticks. Some had the traditional tall stick to help them along the way, whilst some used the more up to date Nordic walking sticks.  I wondered with each pilgrim what their story was.  Why were they alone on a track on a rainy day in November?  What were they looking for?   There were so many more walkers than I expected to see.  I imagined a multitude of personal lives, all strangers but united by their common physical goal but with different spiritual agendas.  Were these people on their lone walk driven by grief or love?  A businessman escaping the rat-race.  A woman looking to lay down the burden of a painful divorce.  A priest drained by the lives of pain of his flock seeking a reaffirmation of his faith, a spiritual rebirth to excite and restore his weary jaded bones so he had something left to share out. A vane politician, a puffed-up peacock in all the gear, doing something interesting he could write about in his memoirs to make him look good.  A woman determined to challenge herself physically as she never had before. A young man of the Instagram Generation taking photos and selfies at each marker which displays the shell, the symbol that the pilgrims follow.

The city sprawled ahead of us and we found our way to the campsite and without further ado walked to the old town and the Cathedral.  As soon as saw the stone arches and cobbled streets of the old town, it all felt hugely familiar. I was delighted to recognise one of the roads and a café in front of the Alameda (park) which I think was there when my grandmother was alive.  We ate mussels and drank wine there as the barmen chattered to each other animatedly moaning about their families.

The following day, we set off to look for the street where I was born.  As we walked down a road, I glanced around and knew I had been there before. It was the market and being a Saturday morning we went to have a look.  The market thronged with colourful loud chattering Gallegos.  It is made up of corridors with stalls on each side.  Each corridor was devoted to a theme.  Fish, Meat, Vegetables.  Women barked out questions to the fishmongers and men stood in the middle chattering to each other about football.  Our mouths watered as we strolled through the crowds and smelled the freshness of all the produce.  The octopus red and plump, the fish shining and bright eyed, the cheeses creamy and delicious, the bread and cake stall surrounded by excited children waiting to choose a bun.

Part of my DNA belongs in this market.  My Grandmother, my Abuela, brought up my mother and aunt alone and made her living by trading in Padron Peppers, buying them from the farmers coming in from the country and doing deals with the stall holders.   Not so much city trader but definitely trading in a city.  It helped her pay the bills and put food on the table at a time when being a woman alone was not easy.

We were delighted, on turning the corner to find an entire hallway with bars and kitchens, and signs inviting people to buy their produce from the market, and have it cooked by these fine chefs.  There were many people taking up the offer, big family groups and groups of twenty somethings crowded around the tables eating clams and drinking wine and beer.

I felt slightly sad that for various reasons we had grown so separate from this city, from this region having moved to the UK.  I guess there was no internet and no Facebook, no cheap flights, so families that migrated were less able to keep their links intact as the older generations died.  I vowed that I would spend some time tracking down family members and arrange a longer trip to visit them.

The market and the memories I had tapped into were almost more exciting than finding the house of my birth which, with a little whatsapping with my brother, I finally found.  I was slightly disappointed to realise the front façade had been changed, as, in my imagination I could still see my Grandmothers front balcony stuffed full of colourful flowers in pots.

We topped off the day with a visit to the inside of the cathedral. Now, I will just have to come back because there is a massive renovation going on so much of the inside is covered in scaffold though you can still visit the apostle’s crypt.  The pilgrims were numerous here as traditionally they end their walk embracing the reputed remains of Saint James of the city title. 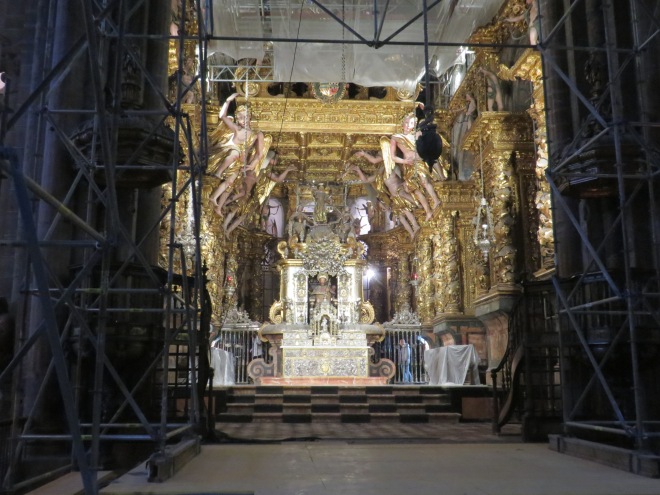 The other great tradition was the Botafumeiro which is basically a giant incense burner which priests swing over the heads of the congregation on the end of a rope.  I saw it as a child and stood looking at the altar and closed my eyes so I could conjure up the smell and the sounds in my mind.  The Botafumeiro cannot operate whilst the renovation is going on, so a revisit is on the cards in the next couple of years.

The most interesting aspect of the city is the sounds.  Gallegos talk loudly, laugh together loudly.  When I was growing up in the UK, my friends used to ask me what I was arguing with my mother about in Spanish.  I didn’t know what they were talking about.  We weren’t arguing we were just talking. This entire city was filled with people just talking.

I felt the history of my Abuela in this place of my birth as we strolled through the Alameda and admired the benches and fountains which I recognised from my childhood.  I am a child of Europe, it lives in me and is an important part of what made me.   This makes me happy.